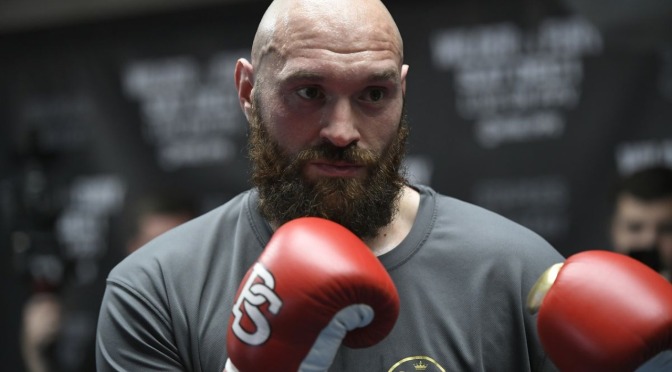 Only an addict knows the pain and depths of despair you experience when caught in the grips of the disease of addiction. Tyson Fury, nicknamed the “Gypsy King” has been there. He nearly lost his career and his life to cocaine and alcohol addiction after stunning the world with a unanimous decision over Wladimir Klitschko in 2015. Two years later, he was banned from boxing for using anabolic steroids. Depression set in, and suicidal thoughts soon followed.

They say the mightiest oak may fall from rot on the inside. Tyson Fury, a massive six feet nine inches tall, two hundred seventy pounds, was well on his way to a crash, but an indomitable will and faith in a loving and caring God raised him from the ashes. He put the drugs down, changed his eating habits, and re-dedicated himself to his marriage and raising his five children. By December 2018, he was back in the ring and ready to fight for the heavyweight title again.

When Tyson Fury arrived in Los Angeles for his first fight against Deontay Wilder, he was deeply affected by the plight of the homeless on the streets of the City of Angels. Fury vs Wilder 1 ended in a controversial split decision, but his purse and the proceeds from pay-per-view amounted to roughly $9 million. Tyson didn’t want it. He donated the entire amount to help feed and house homeless addicts and alcoholics. The herculean boxer, now an outspoken proponent for mental health programs, saved a lot of lives that day.

Love him or hate him, here at October Golf Magazine, we are entering Tyson Fury into our “Hall of Heroes.” He’s made some controversial comments in the past and was obviously not a “nice guy” when his depression and addiction were going untreated. Those comments are part of who he was, not who he is today. This past Saturday night, after winning a resounding TKO victory in Fury vs Wilder 2, he gave thanks to his Lord and Savior, Jesus Christ, and then he sang a two minute rendition of Don McLean’s “American Pie.” He also praised his opponent and called him a “true champion who will be back.” Check out the full post-fight interview below.