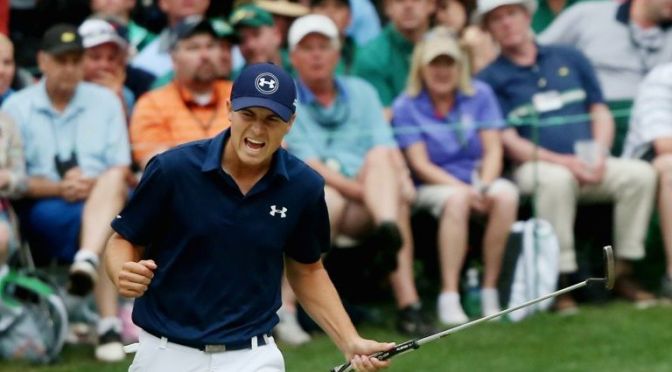 Maridoe Golf Club in Dallas is open and they’re hosting a charity golf tournament this week. Just yesterday, Jordan Spieth, a celebrity non-competitor in the event, paired up with former Dallas QB Tony Romo and gave fans their first taste of what the game will look like post-Covid. He got “foamed” on the seventeenth.

Enter the term into your golfer’s dictionary. It’s probably going to stick. Spieth teed up on the par three 17th, hit a perfect shot that bounced once and landed in the hole. Then it bounced out and landed in the water. The hole, modified with a spacer for safety, rejected the shot and denied him an Ace. He wasn’t competing for the win, but he did have a bet going with Romo.

Tony let Jordan have the Ace for personal stats because it was obvious what had happened, but he didn’t count it towards the bet. Would you? Spieth hasn’t won in a while, but he still has three majors in his pocket and has earned $38 million playing the game. Romo’s worth more than that, but it’s all about the bragging rights.

Expect to See This Again

It might not be on an Ace, but we’ll definitely see golfers get foamed again this year. Spacers aren’t likely to be removed any time soon. There’s a good chance they might be a permanent addition. Will we see putts and chips go awry because of them? On the PGA Tour, where matches are often decided by the slightest break of the ball, we are likely to witness some controversy this season.

On a lighter note, the first official PGA Tour event is only a few weeks away and it is also scheduled to be played in Texas. The Charles Schwab Challenge is on for June 11-14 at Colonial Country Club in Fort Worth. Hole spacers will be used and fan participation will be limited. The purse is $7.5 million, which is a lot of money. Hopefully no one gets “foamed” out of it in the final round.